Using photography and writings, this website features memoirs that recapitulate more than four decades of travel and field time with students, research associates, birding and fly fishing friends.
The exceptional nature experiences throughout my life would not have been possible without the love and support I receive from my wife, best friend and fishing partner, Sue Denega, to whom this website is dedicated.

Photography is a great activity for documenting the beauty, passion and enthusiasm of encounters in the natural world. I began photographing in eighth grade with a home-built pinhole camera. Composition, creativity and light, not expensive camera gear, determine the outcome of successful images. Enjoy these images photographed in classrooms without walls: 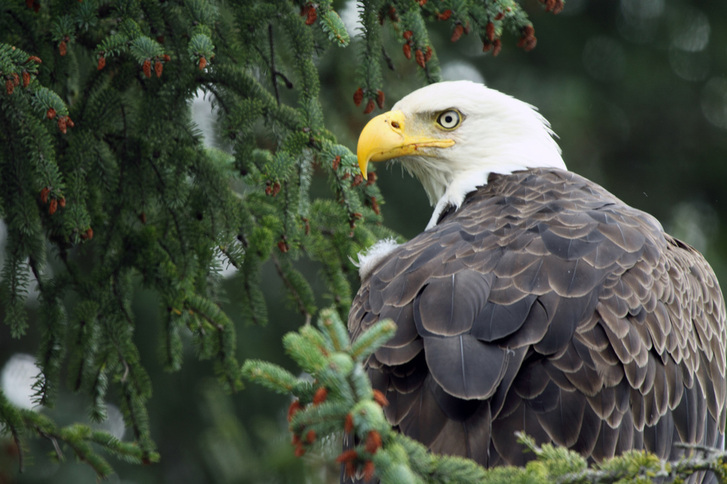 A combination of hard work and good luck can result in great wildlife encounters, like this Bald Eagle I photographed on the Dangerous River in South Coastal Alaska. Unlike vultures that lack head feathers, Bald Eagles are in fact not "bald". It takes four to five years of life for the plumage of Bald Eagles to reach full maturity, which includes white feathers in the head and tail. Perhaps a name change for the Bald Eagle would be prudent. 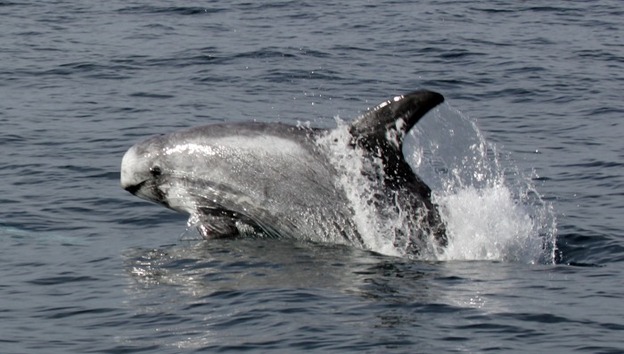 Risso Dolphin Monterey Bay ©Lora Wade
Encounters with Risso Dolphins are often close and personal. Check out the smile on this animal's face, the short bulbous head and the large dorsal fin, which makes identification easy. On this unusual calm day in Monterey Bay on the central California coast, my natural history students encounter hundreds of dolphins, including the largest of all dolphin species - the Orca! 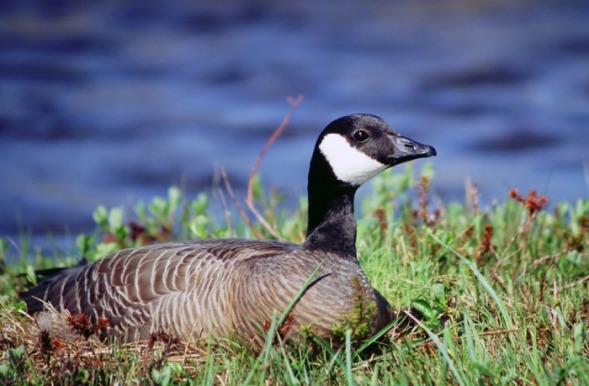 Within the 19 million-acre Yukon Delta National Wildlife Refuge, where millions of birds mostly waterfowl, return to nest each year, we hike many miles each day in search of nesting birds like this exceptionally photographic Cackling Goose. Our project determines the nesting success of waterfowl in the Yukon-Kuskokwim Delta, one of the largest river deltas in the world. 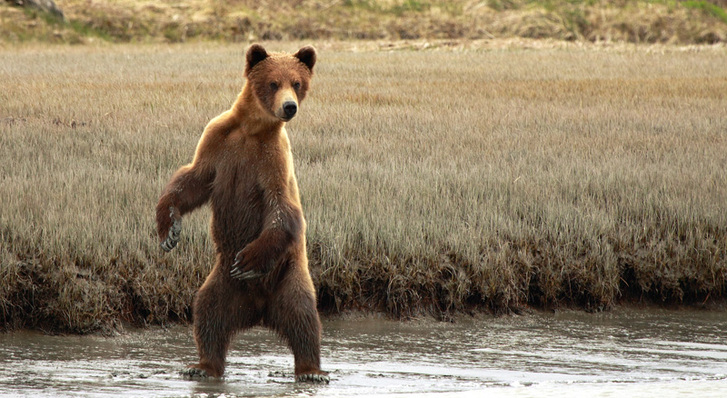 Spring Brown Bear Ahrnklin Estuary, AK ©Mike Denega
A young coastal brown bear is encountered boating along the shores of the Ahrnklin Estuary near Yakutat Alaska. The noticeably low body weight, which is indicative of a bear's condition in spring before thousands of salmon arrive in the rivers, will increase rapidly as the season progresses. This animals sibling and a very large aggressive mama bear are nearby. 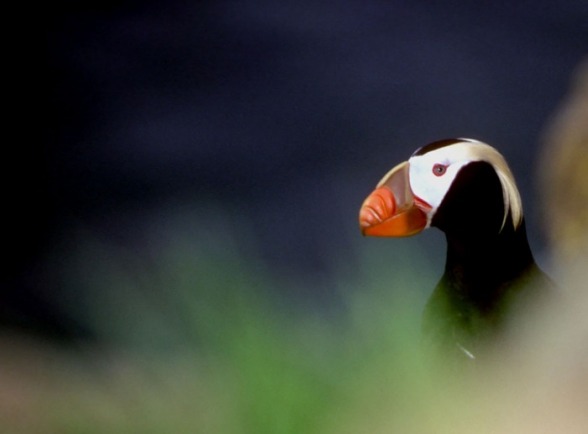 Native Yupik Eskimos inhabiting St. Lawrence Island in the Bering Sea are world-class ivory carvers, expert whalers and masters of the game of Scrabble. No kidding! While living in the small village of Savoonga with Yupik natives, I help gather life history data in a massive colony of seabirds - about a quarter of a million birds representing more than a dozen species. It's hard to believe that this photographer would hang over a shear cliff anchored only by a foothold on two small unstable rocks to photograph this magnificent Tufted Puffin. That's what photographers do! George Stellar called these animals "Sea Parrots". 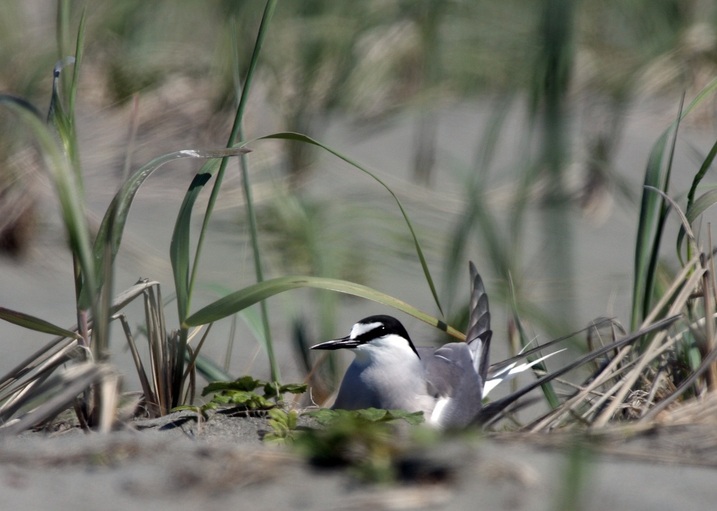 Aleutian Tern Black Sands Spit Yakutat, AK ©Mike Denega
This gorgeous specimen, an Aleutian Tern, is sitting on eggs at Black Sands Spit in south coastal Alaska. Black Sands Spit may be the largest nesting colony of Aleutian Terns in Alaska. Capturing this photo is not an easy task, as it requires crawling many meters to retain a low profile and tolerating bombardment by extremely aggressive Arctic Terns, which share the nesting colony.  Recently the use of geolocation devices – a tiny research tool that is attached to a bird uses light angles to determine migration routes – discovered that at least one Aleutian Tern from here spent a winter in the Sunda Strait, Indonesia and returned the following spring to nest again at Black Sands Spit. Round trip distance over open water is 14,816 miles! 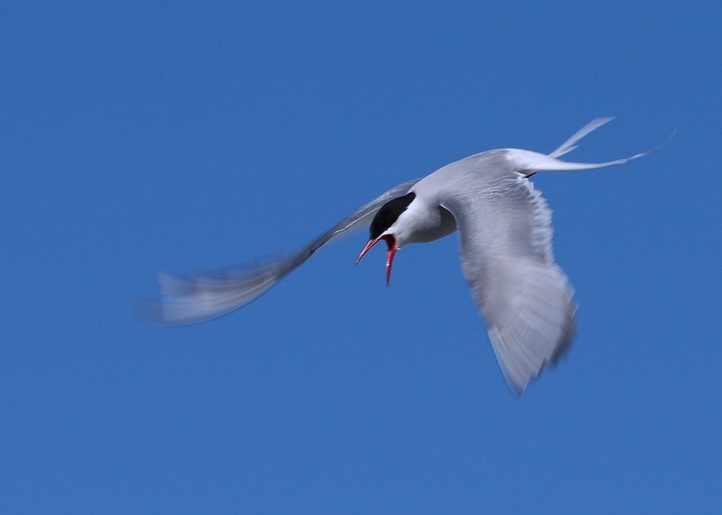 Arctic Tern in attack mode ©Mike Denega
This photograph of an Arctic Tern says it all: the aggressive nature of these birds – sharing the same nesting colony as Aleutian Terns – may in fact contribute to the nesting success of their more docile cousins by deterring potential predators. As we walk the tern colonies, collecting data on both species, we add protective hard hats to our equipment wish list!